The Belfast Natural History and Philosophical Society is celebrating its Bicentenary in 2021. A series of events and publications are planned to mark this year.

The Society came into being on Tuesday 5 June, 1821, when eight men interested in natural history met at the house of Dr James Lawson Drummond in Chichester Street, Belfast. He became the first President of the Belfast Natural History Society (after ‘the Society’) which took subscriptions from members and requested them to read papers on scientific related topics. Collections of materials and objects were accumulated through the members’ occupations and efforts.  Following the erection of a building designed by architects Thomas Duff of Newry and Thomas Jackson of Belfast, a Museum was opened in 1831 for exhibiting these. It was the first Museum funded by public subscription in Ireland. 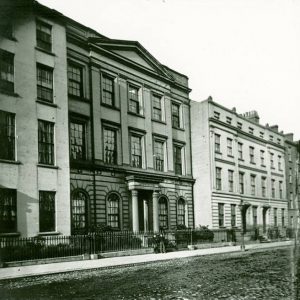 Other Societies in Belfast, like the Literary Society, the Historic Society and the Phrenological Society, had connections with the Society and used the Society’s Building.  The Botanic Gardens in Belfast, founded in 1827, were superintended by James MacAdam, brother of Robert Shipboy MacAdam, a founding member of the BNHPS, Gaelic scholar and business man.

In 1842 the Society realised the range of subjects it dealt with had broadened and added to its name, becoming The Belfast Natural History and Philosophical Society.  The membership mainly consisted of the Belfast mercantile, professional and business classes which meant that the Society was connected with many important institutions. The Society helped host the British Association for the Advancement of Science in 1852 and 1874. It supported the founding of the Belfast Naturalist’s Field Club in 1863. It was instituted as an Educational Charity in 1885.

The Museum collections of the Society were transferred to the Belfast Corporation by Deed of Gift in 1910. The objects continued to be held in the Old Museum Building until eventually being moved to the Ulster Museum where they remain.

The fact that the Society has survived through so many vicissitudes is testament to the calibre of its members over the years.  They have been scientists as well as scholars of antiquities, history and the arts. These include Thomas Andrews (1813-1885) Professor of Chemistry at Queen’s University, Belfast and Robert Lloyd Praeger (1865-1953), naturalist, author and librarian.  Others are Richard Clarke, Professor of Anaesthetics at Queen’s University of Belfast and author of a History of the Royal Victoria Hospital, Belfast, also Mrs Margaret Garner nee Yeames (fl.1910-1990), galanthophile and artist, and, recently, Dr Jonathan Bardon (1941-2020), historian and author.

In the The Belfast Natural History and Philosophical Society: Centenary Volume 1821-1921 (Belfast, 1924), Arthur Deane wrote of the Society continuing to ‘cultivate a love of knowledge’ amongst its members and the wider public. Nearly one hundred years later, the Society still continues to do so in its original building and through an additional programme of special events as it celebrates with pride its Bicentenary year.

Keynote Lecture to mark the Bicentenary Year of the Society

‘We are made of star stuff’

Have you ever thought where the chemical elements in your body were formed? Or how they got to be in you?

This lecture will describe our latest understanding of the answers to such questions. 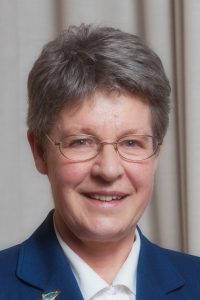 Jocelyn Bell Burnell inadvertently discovered pulsars as a graduate student in radio astronomy in Cambridge, opening up a new branch of astrophysics – work recognised by the award of a Nobel Prize to her supervisor.

She has received many honours, including a $3M Breakthrough Prize in 2018.

The public appreciation and understanding of science have always been important to her, and she is much in demand as a speaker and broadcaster.  In her spare time, she gardens, listens to choral music and is active in the Quakers. She has co-edited an anthology of poetry with an astronomical theme – ‘Dark Matter; Poems of Space’.

To mark 100 years since the Society visited this site.

by kind permission of the Belfast Harbour Commissioners

Articles by Professor Alun Evans, President of the Society, will be published in the Ulster Medical Journal (May, 2021) and in the Ulster Journal of Archaeology (Autumn, 2021).

Subject to restrictions on public gatherings, the May outing will be held on a date to be confirmed.